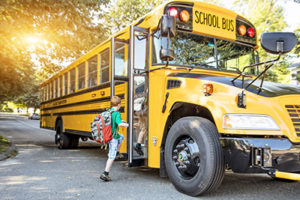 Kyle Schmidt has been the fleet manager for the Ithaca City School District for about three and a half years now. Before that, he worked as an automotive mechanic when the Trumansburg Central School District was in the process of converting its diesel buses over to propane autogas.

So he knows a thing or two when it comes to comparing diesel-fueled buses to those powered by autogas.

While the cost difference between the two fuels constantly fluctuates with the market, propane usually comes out as the winner. But the biggest savings Kyle has seen appear on the maintenance side.

“Here’s a good example. Through experience with our diesel fleet, we’ve found that we usually have to replace the VGTs during the five-year warranty period,” says Kyle. “But after that, we’re replacing them about every 15 months on average. And that costs the district $2,600 a pop.”

Kyle says there is also less downtime for an autogas-powered fleet.

“If you send the filter for a diesel-fueled vehicle out to be cleaned, the vehicle could be down for days at a time. With propane, you don’t have to deal with any of that,” he says.

“You can leave the autogas buses idling in front of the school, and there’s literally just water and air coming out of the tailpipe,” he says. “Before, especially with the older diesel engines, some of them just billow out a lot of smoke. Who wants their kids around that?”

The World Health Organization and the Environmental Protection Agency have identified diesel engine exhaust as a carcinogen, which can cause adverse short- and long-term health effects.

Even with the new “clean” diesel buses, new propane school buses can reduce NOx emissions up to 75% over new diesel buses.

Propane auotgas refueling is also more budget friendly than many alternative fuels. For example, you can install 10 propane autogas refueling stations for the price of one compressed natural gas station.

“It’s basically the same as refueling fleets with diesel or gasoline,” he says.