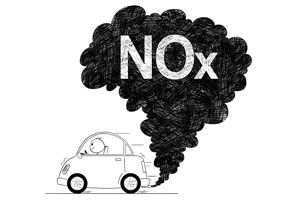 According to a recent study by West Virginia University’s Center for Alternative Fuels, Engines and Emissions, propane autogas is a proven way to dramatically decrease emissions of toxic nitrogen oxides (NOx).*

Exposure to NOx exhaust can trigger health problems like asthma, bronchitis, and other respiratory issues. The primary source of NOx is motor vehicles—including school buses.**

According to the study, the findings are significant because NOx represents one of the biggest challenges to air quality in the United States. This toxic gas is a major concern for many areas in our country.

Oxides of nitrogen are highly reactive gases composed of nitrogen and oxygen. They form when hydrocarbon fuels are burned at high temperatures. The United States government regulates NOx transportation emissions because they affect human health and the environment.

According the U.S. Energy Department’s Alternative Fuels Data Center, approximately 55 percent of manmade NOX emissions come from motor vehicles like school buses, which are ubiquitous across the country.

Completed in 2018, the study, which was commissioned by the Propane Education and Research Council, involved two types of tests at different times of the year on four Blue Bird school buses. A model year 2015 propane autogas school bus and a model year 2014 diesel school bus were tested in January/February 2018.

NOx emissions were 15 to 19 times higher for the diesel school bus over a hot-and cold-start city route. For this route, the propane autogas bus reduced NOx by 95 percent!

Additionally, NOx emissions were 34 times higher for the diesel school bus over a stop-and-go route similar to actual usage. For this route, NOx was reduced by 96 percent and carbon dioxide by 13 percent with the propane autogas bus. Subsequent testing performed in late 2018 with newer model year and lower mileage propane autogas and diesel buses confirmed the findings from the previous testing.

School districts have also gained enormous fuel savings by using propane autogas instead of more expensive diesel fuel. In terms of fuel and maintenance costs, schools can expect to save an average of $3,000 to $5,000 per bus.

The Propane Education and Research Council estimates that if all older, dirtier diesel school buses across the United States switched over to clean-burning propane-fueled buses, the savings would be enough to cover the hiring of 23,000 teachers.

Read more about propane for New York school buses. And then reach out to an autogas conversion installer or supplier to find out more about the benefits of adding propane autogas buses to your school fleet.