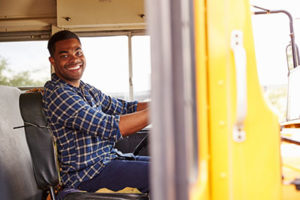 About five years ago, the Trumansburg Central School District reached its goal of converting half of the 24 buses in its fleet from diesel fuel to propane. Today, 20 out of the now 27 buses in the fleet operate on propane power.

“The transition started before I arrived, but we continue to keep building on our success with propane auotgas,” says Joe Magliocca, who has been the director of facilities and transportation for the school district since 2014.

Joe says that the school bus drivers were against the switch to autogas at first because they thought driving performance would be lessened—a common myth about autogas-powered vehicles.

But that all changed once they started driving the new buses. Drivers discovered, to their great pleasure, an uptick in engine power—especially when they were navigating hilly terrain.

“It’s a little punchier,” Joe says. “With a lot of stop and go, the drivers appreciate the power they’re getting from a propane engine. They also appreciate the quieter ride—and I’m sure our kids do, too.”

There is another important benefit to converting to propane-fueled buses. Diesel exhaust gives off harmful particulate matter, which poses a problem for children, especially those who suffer from respiratory-related health issues. Using propane as the main fuel for a vehicle produces 80% fewer smog-forming hydrocarbon emissions than older diesel engines.

The propane-fueled buses for Trumansburg also come equipped with a variety of new safety features. The propane tank itself is made of quarter-inch-thick carbon steel, which makes it 20 times more resistant to any sort of puncture along the fuel line.

A protective design feature is that critical valves are strategically placed away from potential damage in an accident and also include an automatic fuel shut-off valve in case of a rupture in the fuel line.

“We’ve also seen a big reduction in costs, for both maintenance and fuel,” says Joe. “And it certainly helps that we have a local supplier who is very reliable. They get good grades from us.”